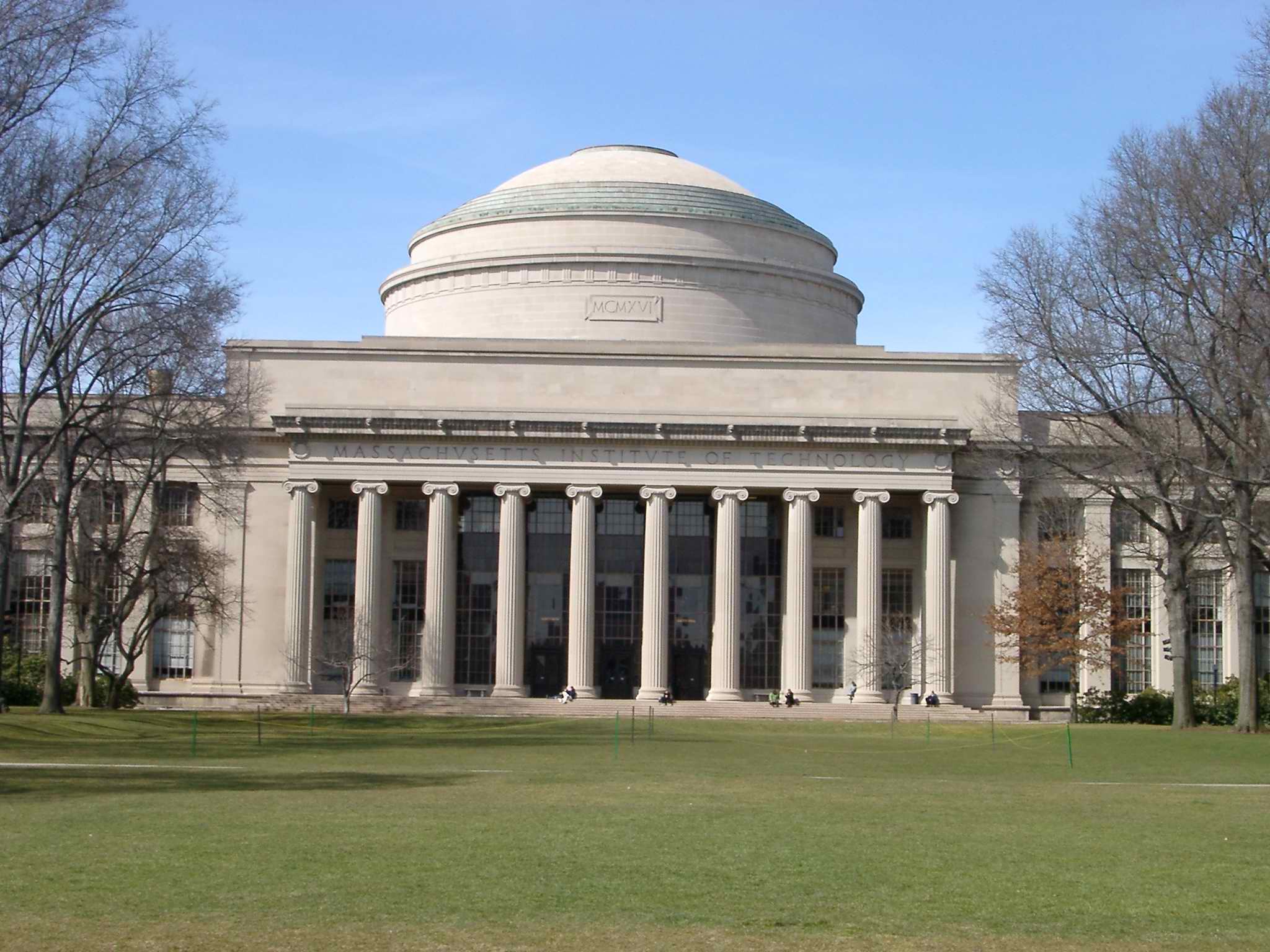 "The spirited, slightly-mischievous side of Boston, located just a bridge away on the other side of the Charles River" - is home to two internationally prominent universities, Harvard University and the Massachusetts Institute of Technology - hence its reputation for being an intellectual center of the United States. However, if you have younger, school-age children, they will be enrolled in the Cambridge public schools!

The first houses were built in the spring of 1631. The settlement was initially referred to as "the newe towne", in the heart of today's Harvard Square. The marketplace where farmers brought in crops from surrounding towns to sell survives today at the small park at the corner of JFK and Winthrop Streets. 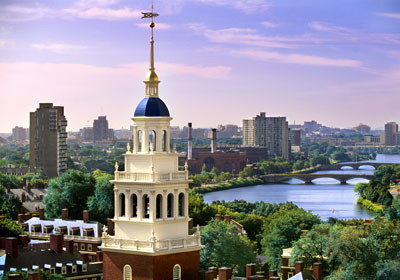 Home to the famous Fireside Poets, Cambridge grew quickly with the construction of bridges (now 11 in number) crossing the Charles River and connecting it directly to Boston. Its commercial center also began to shift from Harvard Square to Central Square. The 1980s brought a wave of high-technology startups; but now, the city houses a thriving biotech industry. By the end of the 20th century, Cambridge had one of the more expensive housing markets in the Northeastern United States. On the plus side, however, Cambridge has the lowest property tax rate in the Boston metropolitan area!

As a resident of Cambridge, you will be known as a Cantabrigian. The diverse mixture of Cantabrigians creates an atmosphere where any family will feel comfortable and at home. The city is beautifully laid out in a series of squares, including Kendall Square, Central Square, Harvard Square, Inman Square, Porter Square, and Lechmere Square. These and the residential areas give you the feeling of being a part of a close-knit, small-town atmosphere.

The 13 major residential neighborhoods making up Cambridge are: 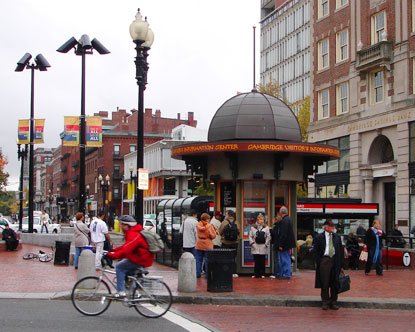 Harvard Square, is located in the center of Cambridge at the intersection of Massachusetts Ave, JFK Street, and Brattle Street, and is home to Harvard Yard and Harvard University, the oldest university in the country. It is a popular shopping and social destination, with a blend of unique local shops, cafes, and restaurants, as well as some large chain establishments. Harvard Square condos are highly sought-after because of the vibrancy of the neighborhood. Harvard Square is known for the Garage Mall, a former parking garage that was redeveloped into a mall, as well as the historic Out of Town News Stand, still in business today.

Harvard Square is a popular gathering place for young people associated with counter-culture movements, as well as street performers, tourists, and the students and faculty of Harvard University; creating an extremely active and diverse community. Finding parking in the area can be challenging, but the access to public transportation provides excellent access to the rest of the city. 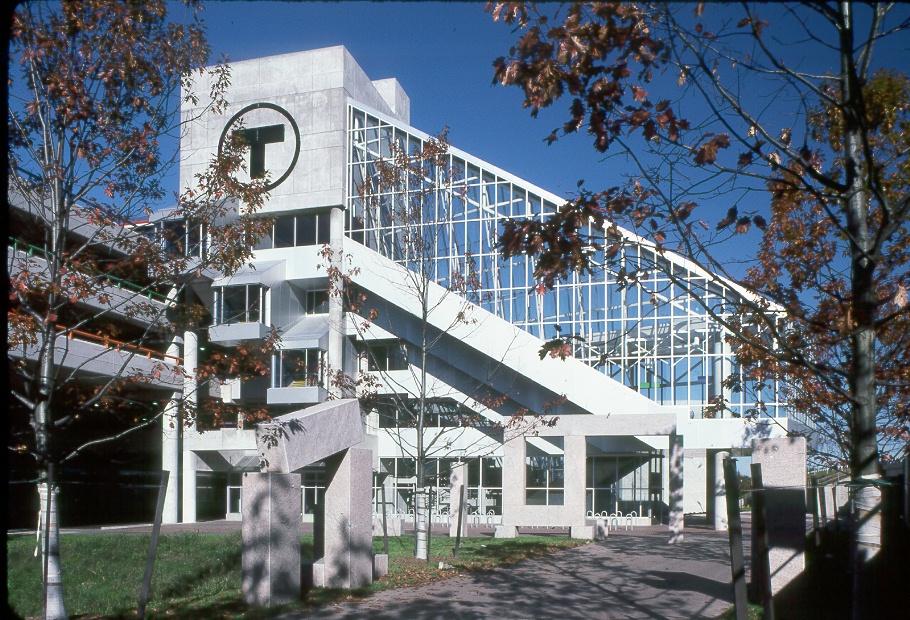 If rapid transit is important to you, Cambridge is well served by the MBTA, including the Porter Square stop on the regional Commuter Rail, the Lechmere stop on the Green Line, and five stops on the Red Line (Alewife, Porter Square, Harvard Square, Central Square, and Kendall Square/MIT). Alewife Station, the current terminus of the Red Line, has a large multi-story parking garage. The Harvard Bus Tunnel, under Harvard Square, reduces traffic congestion on the surface, and connects to the Red Line underground. Some of the main squares: Inman, Porter, and to a lesser extent, Harvard, are very close to the city line, as are Somerville's Union and Davis Squares. With a "Walk Score" of 100 out of 100 possible points, you might even be able to walk to work.

Local news in Cambridge is delivered by The Cambridge Chronicle, The Harvard Crimson, and of course, The Boston Globe and The Boston Herald.

You can obtain information about the city and its services from its official web site; and, if you have a particular property in mind to buy, access its database to find out how much it is assessed for. You will be happy to know that Cambridge offers a reduction in taxes to owner-occupants. You can obtain the form and current tax rates online.

This is Cambridge's best real estate site to search for: homes, land and foreclosure properties. It is seriously the only site you will ever need to find your next home or investment property! Bookmark this page and check back anytime to see what is currently available in Cambridge. Unlike other search sites which includes properties already under contract, this site only shows properties that are truly available. This site is updated by the official REALTOR®’s database every 15 minutes.

Here, you can save searches, and get daily email alerts of new listings, price changes, sold data, and market reports. Use our map search which allows you to search and view properties on a map! After you open the map search feature, zoom in or out on your preferred area and then, click on the hexagonal symbol to the top far right of the map, click on the map where you'd like to mark your outer limit search, then continue clicking to end and begin the each line segment until you have created a search box. Alternatively, click on Revise Search and enter the town and area you wish to focus on. Click here to open the Interactive Map Search.

Are you already a homeowner and considering selling or refinancing your home? Get an INSTANT property valuation now!

Curious about what’s happening in your neighborhood? You can create a custom market report to see what’s active, under contract, and sold in your neighborhood! Not tech savvy? Contact us and we'll set it up for you or assist you in any other way to make your next move painless and perhaps enjoyable!

73-75-77 River Street Cambridge is ideally located for people who are looking for proximity to night life, shopping, MBTA red line and vibrant restaurants. The top floor ...

Just steps from the Charles River, this sun drenched one bedroom in the heart of Cambridgeport will not last. Situated in a renovated Victorian home, this unit features i...

You'll be amazed at the comfortable size of the two bedrooms! and certified lead free. Perfect property for an investment or make it your own with annual residential taxe...

Located on a desirable tree lined Mid-Cambridge street, this 3rd floor condo is perfect for your first home or as an investment condo. It is ideally located minutes to Ce...

This is truly a one-of-a-kind home here in the Kensington. The quality and detail in this one bedroom unit far surpass all others. It's kitchen is fully equipped with s...

RARE OPPORTUNITY!!! HUGE PENTHOUSE ONE BEDROOM with skylights! **UNIT LEASED THROUGH 7/31/20 for $2850** Great views including the Zakim Bridge & Boston Harbor. Wall to w...

**Contractor SPECIAL** Great opportunity for a developer, builder, or someone looking to rehab themselves in beautiful East Cambridge. The property is situated around mul...

Introducing 57 Hurley Street Unit 1 ....Located in the heart of the highly sought borough of East Cambridge this 2 bed 2 bath will instantly make you feel right at home. ...

Conveniently located between Harvard Sq and Central Sq is this front-facing two bedroom, two full bath unit in one of Cambridge's most desirable full-service residential ...

MODERN AND NEWLY RENOVATED BROWNSTONE CONDO in the desirable Central Square Area in Cambridge. This condo is comprised of over 1,100 sqft and offers 3 beds + 2.5 baths o...

SOPHISTICATED TOWNHOUSE IN THE HEART OF PORTER SQUARE! Tucked away on a dead-end street, lies a refined, upscale townhome with an incredible design. An ideal landing spo...

MODERN AND NEWLY RENOVATED BROWNSTONE CONDO in the desirable Central Square Area in Cambridge. This condo is comprised of over 1,305 sqft and offers 3 beds + 2.5 baths o...

SPECTACULAR MODERN BROWNSTONE CONDO in the desirable Central Square Area in Cambridge. This condo is comprised of over 1,250 sqft and offers 2 beds + 2.5 baths over two...

Incredible opportunity awaits in this Mansard Victorian in desirable Agassiz. The 2 bed, 2 bath unit is over 1500 sqft on 2 levels and includes a deeded parking space and...

The Concord Avenue Residences, completed in 2020, are new construction luxury homes located in the Observatory Hill neighborhood of Cambridge, designed to offer the conve...

The Concord Avenue Residences, completed in 2020, are new construction luxury homes located in the Observatory Hill neighborhood of Cambridge, designed to offer the conve...

This open concept townhouse has been entirely refinished, complete with 3 bedrooms, 3.5 bathrooms, a fully finished basement, and one tandem parking space. No detail has ...

This open concept townhouse has been entirely refinished, complete with 3 bedrooms, 3.5 bathrooms, a fully finished basement, and one tandem parking space. No detail has ...

Even the street view of this beautifully-modernized renovation will thrill you. The elegance of this 3 bedroom, 3½ bath home begins with an open floor plan that features ...

This rare find is a showcase of modern luxury nestled on a quiet side street. Neutral dark tones and wood-accented exterior give way to a bright, high-ceilinged fanfare o...

Hurry! Cambridge Central Square! Single Family! Beautiful and modern multi-level home on a private lot nestled in the heart of Cambridge. This home expands across 4 open...

The first of the The Sennott Park Residences to come to market! Located in the vibrant Central Square neighborhood of Cambridge. Expanding across three levels, the three-...

The first of the The Sennott Park Residences to come to market! Located in the vibrant Central Square neighborhood of Cambridge. Expanding across three levels, the three-...

Located on a delightful tree-lined residential side street this new-construction townhouse is intelligently designed with a flexible and comfortable layout and built with...

For buyers seeking quality, location & service in Cambridge, one often has to take on significant renovations. Not so with this beautifully redone 3-bed duplex in one of ...

Rare development opportunity in the heart of Kendall Square! 231 (MLS # 72586946) and 235 Third Street are being offered for portfolio purchase; each property is priced ...

Rare development opportunity in the heart of Kendall Square! 231 (MLS # 72586946) and 235 Third Street are being offered for portfolio purchase; each property is priced ...

Rare residential development opportunity in heart of Kendall Sq! POTENTIAL for 18 units! 231 & 235 Third St are being offered for portfolio purchase for $2.25 each.W/ a c...

As you enter 136 Cushing Street, you'll notice the sharp lines, and a visionary design come to life by a prominent Cambridge builder. The many oversized windows, with cus...

As you enter 136 Cushing Street, you'll notice the sharp lines, and a visionary design come to life by a prominent Cambridge builder. The many oversized windows, with cus...

A Prestigious Historical Brick Row House awaits you. The property is simply amazing! A Single Family home nestled in the Heart of Harvard Square - home of world renowned ...

Rich with cultural history, architectural detail and fantastic potential for renovation, the Wyeth-Eliot House is perhaps one of the few remaining opportunities to reinve...

Unusually spacious 3-bedroom, 3 /2-bath condominium on the 6th floor in the well established Residences at Charles Square, very close to the heart of Harvard Square and c...

New to Market! Great location in Inman Sq is this mixed-use/residential building offering 15-units with twelve 1BRs, one 2BR and two retail spaces currently used as a De...

Amongst the stately residences along historic Brattle Street sits this stunning property less than half a mile from Harvard Square and the Charles River. The home was exq...